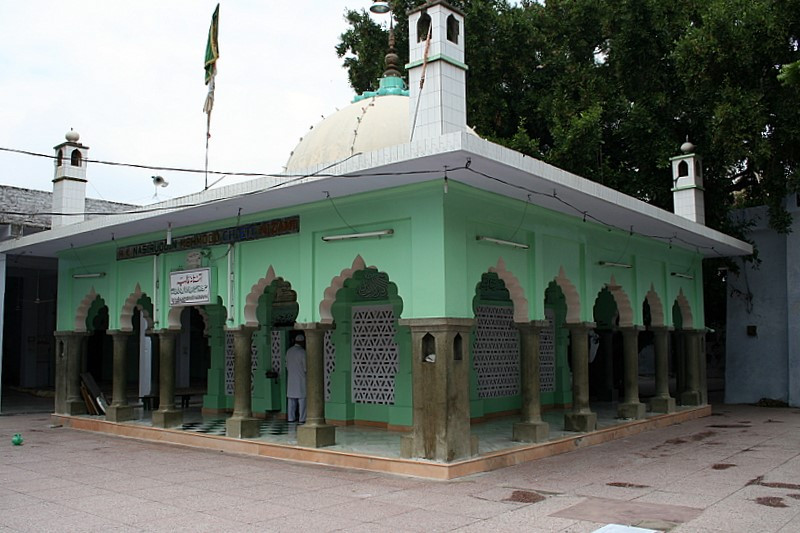 He was given the title, “Roshan Chirag-e-Delhi”, which in Hindi and Urdu, means “Illuminated Lamp of Delhi”

At age forty, he left Ayodhya for Delhi, where he became the disciple of Khwaja Nizamuddin Auliya (رحمتہ اللہ علیہ), it was here that he stayed for the rest of his life as his murid (disciple) , and eventually after his death, became his successor. In time, he also became a known poet in Persian language

One of his noted disciple was Khwaja Bande Nawaz Gesu Daraz (رحمتہ اللہ علیہ), who later moved to Daulatabad around 1398, owing to the attack of Timur on Delhi, and from where at the invitation of Bahamani King, Firuz Shah Bahamani, moved to Gulbarga, Karnataka, where he stayed for the following 22 years of his life, spreading the Chishti Order in the South till his death in November 1422. The Dargah of Khwaja Bande Nawaz (رحمتہ اللہ علیہ), exists today in the city of Gulbarga, as a symbol, multi-religious unity.

After his death, his tomb was built by Firuz Shah Tughluq (r. 1351 – 1388), the Sultan of Delhi in 1358, and later two gateways were added on either side of mausoleum. One of noted addition was a mosque built by a later Mughal emperor, Farrukhsiyar, in early 18th century, and popular among both Muslims and Non-Muslims. A humble tomb of the founder of Lodhi dynasty, Bahlul Khan Lodhi (r.1451-89) lies close to the shrine in the present day locality of ‘Chirag Delhi’ that grew around the tomb, and is still goes by his name, it is very close to the locality of Greater Kailash, in South Delhi.

Nasiruddin Chiragh Dehalvi (رحمتہ اللہ علیہ), unlike his spiritual master Nizamuddin Auliya (رحمتہ اللہ علیہ), did not listen to sama, which was considered as unislamic by a section of the Muslim intelligentsia in that period. He did not however pass any specific judgement against it. This is the reason why even today, qawwali is not performed near his shrine in Delhi. Hazrat Nasiruddin’s (رحمتہ اللہ علیہ) descendants are to be found far and wide as a lot of them moved down South to Hyderabad. The Dargah of Badi Bua or Badi Bibi, who said be the elder sister of Hazrat Nasir Uddin Mahmud Chiragh Dehlavi (رحمتہ اللہ علیہ),

Chiragh-E-Delhi Dargah is situated in the village of Chiragh Delhi. This township grew up around the Dargah slowly and gradually. The dargah entombs Nasir-ud-Din Mahmud (رحمتہ اللہ علیہ), who was bestowed with the title of “Raushan Chiragh-I-Dili” (illuminated lamp of Delhi). He was a disciple of Hazrat Nizam-ud-Din (رحمتہ اللہ علیہ) and also succeeded him to become the head of the Chishti sect. Nasir-ud-Din Mahmud (رحمتہ اللہ علیہ) was a mystic as well as a poet. His compositions have contributed greatly to Urdu poetry. The saint left for the holy abode in the year 1356.

Initially, the main tomb was enclosed within rectangular walls, built of rubble. This chamber was constructed by Muhammad Bin Tughlaq, who later added a small gateway on both sides of the tomb. However, the original Chiragh-I-Dili Dargah has undergone renovations and repairs a number of times. Now, a twelve-pillared square chamber, enclosed within perforated screens, consists of the tomb of Nasir-ud-Din Mahmud (رحمتہ اللہ علیہ). The chamber has four small domed towers at the corners and is surmounted by a plastered dome, rising from an octagonal drum.

A number of structures, like the Majlis-Khana (assembly hall), Mahfil-Khana (symposium hall), were added to the Delhi Chiragh-I-Delhi Dargah some time back. The structure also comprises of a graveyard, which houses the graves and tombs of several distinguished personalities. Last but not the least, there are a number of mosques situated inside the premises of the dargah. One of these mosques was built by King Farrukhsiyar, in the early 18th century, in the honor of Nasir-ud-Din Mahmud (رحمتہ اللہ علیہ).

Good intention is needed for all activities.
A morsel earned in business is a good thing.
Quest of the world with good intention is the quest of the lasting life.
People have forsaken the Qu’ran and Tradition, so they suffer.
The best prayer is to keep people happy.