Skip to content
On 15th Shawwal, 1434H / 23rd August, 2013 the 3rd Annual ‘Urs’ of Baba Ghulam Jilani R.A., the ‘Khadim-e-Khaas’ of the holy shrine of Hazrat Makhdoom Sabir Kaliyari will be celebrated. 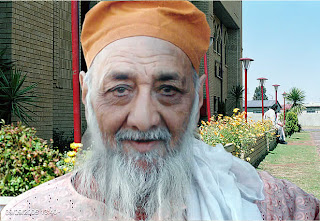 Hazrat Baba Jilani exudes radiance and an aura of intense spirituality, a sensation not easy to forget by those meeting him for the first time. His imposing presence was spellbinding, heart captivating, a rare glimmer of classic Sufi embrace that easily causes instant bewilderment or mild intoxication. A few moments in his company, and time seems to stand still. Past and present seems to fuse and the voice of eternity speaks as it spoke whenever the message of Truth sought a medium.

Frank, forthright and as unpretentious in his actions as in his words, Hazrat Baba Jilani calls towards servanthood as the noblest of pedigrees in the surrender to the Divine Will. Choosing the footsteps of the saintly personalities, Awliya-Allah (friends of God), his was the belief that they are the closest replicas of the Holy Prophet Muhammad (S.A.W) and his Companions (R.A) in their faith and actions. Himself a servant at the holy tomb of the famous saint Makhdoom Sayed Alauddin Ali Ahmed Sabir, at Kalyar Sharief in India, since birth- as an offering to the saint by his parents, of whom he remained their only child.