A legend is there that when Hazrat Amir Khusro’s first saw His Holiness Hazrat Syed Nizamuddin Aulia (R.A). It is said that young Amir Khusro went to His Holiness khanqah, but did not entered and remained at the door by remarking, “I shall select my “Peer” myself, and if it is bestowed with Divine Power he will converse with me even from distance.”

Thus sitting at the door he composed:
Tu an Shah-e-ke bar aiwan-e-qasrat.
Kabutar gar nashinad baz garded.
Gharib-e mustanande baradar amad.
Be ayat andar un ya baz gardad.
(You are such a mighty King that if a pigeon sits on your palace, it turns into a hawk. An outsider and a needy person has come at your door, please let him know whether he should come in, or go away).
His Holiness who had supernatural powers sent him the following verse in reply:
“Biya yet andarun marde haqiqat,
Kibama yak nafas hamraz gardad,
Agar ablah buwad an mard nadan,
Azan rahe ki amad baz gardad.”
(The person who knows the truth may come inside so that we may exchange divine secrets between us for a moment. If that person is ignorant, then he should return on the same path from where he has come here.)
Hazrat Amir Khusro (R.A) immediately got up and ran to His Holiness and fell on his feet and wept! His Holiness accepted him as his disciple (murid) and gradually the two became inseparable and attached to each other.
Love is deep rooted in human nature. Every Soul has a natural inclination towards another soul. Love in fact, –beautifies the soul, and beauty of the soul resides in love for humanity. Love, the Sufis believe is greater than religion. Love is the essence of all creeds. Every worshiper worships God out of Love. Love enslaves him. The true majestic welcomes love whatever its guise. One who has a perfect insight beholds God in everything.
God is both transcendent and immanent. He is the essence of all existence. The whole universe is a manifestation of Allah Taála (God). His Oneness appears in diversity. The Holy Quran points out:
“Which ever way you turn, to God belongs the east and the west there is the face of Allah Taála. He is Omnipresent and All Knowing (Quran 2:115).”
“Are they still in doubt as to their beholding the countenance of God? Do they not realise that God encompasseth all things? (Quran 41:54).”
“When my servants question you about Me, tell them that I am near (with them).” (Quran 2:186)
“Quran Sharif also points out “God is nearer to man than to any other thing.”

Hazrat Amir Khusro was a great Sufi, a wealthy merchant who once exchanged all his wealth for a pair of His Holiness Sultan-ul-Mashaikh shoes, an intellectual giant of many languages, an artist, a prolific author, a genius musician who invented the ‘sitar’, a versatile composer and a true devoted “mureed” of His Holiness. He was “All-in-One” type of highly amazing mixture of Divine gifts.
Hazrat Amir Khusro (R.A) was the son of Amir Alachin a Turk from Laccheen. His actual name was Saifuddin Mahmood Shamsi. At the invasion of Gengiz Khan he migrated from his native place Kesh near Samarkand to Balkh. Saifuddin was the chieftain of Hazara. Shamsuddin Iltamish the King of Delhi welcomed them to his capital. He provided shelter to the dislodged prince’s artisans, scholars and rich nobles. Saifuddin was among them. It was around 626/ 360 A.H/1226 A.D. In 1230 A.D he was granted afief in the district of Patiali (in Etah District-Uttar Pradesh). He married to BiBi Daulat Naz, who bore him three sons and one daughter. Yaminuddin (Khusro) was one among them born at Patiali, presently known as Hazrat Amir Khusro Nagar in District Etah (U.P.) in the year 652-653 A.H/1252-53 A.D. Yaminuddin’s (Khusro) father Saifuddin was mostly engaged in battles, and was killed in 660 A.H/1260 A.D. Yaminuddin or Khusro was an intelligent child. Poetry came to him at the early age of eight.
Later, Khusro reflects on his father’s bravery as:
“My father Saifuddin Mahmood Shamsi, the renowned breaker of enemies ranks, possessed might, enough to conquer the world with all the merits of his inner self, he never spoke about his inherent goodness and behaved like an Angel. He was a military commander and a saint. Although he was highly educated and cultured, he loved martyrdom from the beginning and he drank ultimately the Sharbate-Shahadat.”

There is no country in the World whose cultural heritage is so much blended with divine touch. In Punjabi, Baba Farid and Nanak spoke in poem – thus the beginning of Punjabi literacy heritage. In Gujarat, Narsi Mehta and Meera Bai sang songs of the glory of Ranchchodji – thus the beginning of Gujarati Literature. In Kashmir, Lalleshwari and Nand Rishi (Sheikh Nurudedin) sang to the glory of God – thus the beginning of Kashmiri language. Urdu, (the rich language of India) was also born in the same fashion. His Holiness showed keen interest in the promotion of mutual love and goodwill among all classes of people.
When His Holiness found that languages and dialectic obstacles clogged this harmony and hindered the understanding amongst the Afghans, the Iranians and the Turks and others, His Holiness ordered Hazrat Amir Khusro to invent a “new language” so as to facilitate inter-communication and homogenous oneness amongst the people of India. Hazrat Amir Khusro mixed the Persian with local Brij Bhasha (native language of the North) and this mixture laid the foundation of Urdu. With the passage of time and by its usage it developed into more refined Urdu cultural.
Delhi is proud of His Holiness and Hazrat Khusro. Delhi is proud of Urdu. It was in Delhi that Urdu was born, nourished and flourished. Hazrat Khusro is the father of Modern Urdu Literature. He composed the first poem in Hindi too. He is the pioneer of Hindustani Literature. He was a great scholar in Persian. He introduced Sitar, the five string instrument. He was a pioneer of Indian Classical music.
Hazrat Amir Khusro was not only a talented and highly learned poet of India having full command over Turkish, Persian, Arabic, Hindi and Sanskrit languages but he was a distinguished Sufi by virtue of his initiation and closeness to His Holiness. His poetical composition, specially the Persian-Hindi blending were aimed at cementing the bonds of culture and friendship between the Hindus and Muslims.
Amir Khusro was a leading poet in Persian and Hindi languages. In his introduction to ‘Ghurratul Kamal’ Khusro wrote that, “a few poems that I have composed in Hindi I have made a gift to my friends.” He was a Hindustani Turk. In another famous verse he said, “To speak the truth, I am an Indian parrot. If you want to listen from me some subtle verses, ask me then to recite some of my Hindi poems”.
Amir Khusro says that the Hindus are Mushrik, (i.e. pluralist in their belief of God) as under:
“Though Hindus are not men of our faith, yet on certain points they hold concurrent ideas in respect of our faith. They affirm that life is one and eternal and that God created everything.”
He was the monarch in the field of prose and poetry. His Holiness, Hazrat Syed Nizamuddin Aulia (R.A) says, “He is our Khusro not Nasiri Khusro, May God help my Khusro”. Amir Khusro remained wedded to truth, love and humanity.

Amir Khusro was very promising child. He became a scholar of philosophy and science in short time. At the age of twenty, he became a famous poet. He was a man of soaring imagination. The greatness lies in his breaking the mistrust and isolation in the then existing various culture groups and thus paving the way for reconciliation at the social and ideological levels. Such conciliation and concord amongst them was a moral and intellectual demand besides being an urgent social necessity. Hazrat Amir Khusro rose to a high status because of his connections in political circles and had opportunities of observing many important events from close quarters. He was a man of learning and helped the growth of Hindustani literary societies. His genius unfolded itself in poetry, music and prose.

Son of an Indian Soil
Man himself is a mysterious being. His soul, spiritual powers, insights, intuitive faculties, contact with ultimate Reality and several other things have made him an enigma.
The Holy Prophet says:
“I am creating man from dry clay from black moulded loam. When I have fashioned him and breathed My spirit into him…” Quran (15:29).
Hazrat Amir Khusro (R.A) says:
“Ashiqui um kah gar a waz dahi jane mera
Dost az seenah um awaz bar arad kah manam.”
(I am a lover, if any one calls my Soul)
My beloved responds from inside my breast saying it is ‘I’.
He also believes that his beloved God is omnipresent in his essence:
Hasti man rafat va qayalish ba mamand,
In kah tu beeni nah manam balkeh oost.
(My entity has disappeared, now I think only of Him. That which you actually see is not me but He.)
Allah Tala (God) is the most important being for the mystics to contemplate on. They hold that it is beyond the limits of human mind to apprehend God and to circumscribe Him. Hazrat Amir Khusro argues that even with the help of mental and intellectual faculties it is not possible to apprehend Allah Tala (God):
“Dar niyai bih fahm aliman
Darnah gan ji bih wahm admiyan.”
(Thou cannot be comprehended by worldly people. Thou cannot be confined to the imagination of man.)
Man himself is a mysterious universe unto himself with all his mental powers he cannot understand his own self. How can it be possible to understand Allah Tala?
Hazrat Amir Khusro (R.A) states:
“Ankh khud rashanaqat nah tu aanad,
A free nandah ra kuja danad.”
(A man who cannot conceive his own self, can he ever be able to conceive his Creator)
Thus, said the Prophet (S.A.W.):
Man Arafa Nafsa hu
Faqad Arafa Rabba hu
(Those who realised himself has realised the Allah Tala (God)).
Hazrat Baba Fariduddin Ganj Shakar (R.A) advises that:
“Do not insult a man by a bad word. For in everyone genuine Lord lives.”
Hazrat Abu Sayeed Abul Khair (R.A) says:
“I went to the the church of the Christians and the place of the Jews. And saw that both are facing you.
The desire to meet You took to me to the temple of Idols (Hindus)
And I heard the idols singing Your love songs.”
Hazrat Amir Khusro (R.A) though he was distinguished in Suluk, and Tariqat (Way of God) and was also a great patriot to his mother land. He used to quote a saying of Prophet (PBUH):
“Love of country is like Love of religion.”
This is according to the Tradition (Hadees):
“Oh, group of believers! Love of the country is certainly like the real faith (in religion).”
Hazrat Amir Khusro (R.A) believed, India with its beauty – is a Paradise on the earth!.
He said:
“Kishwere Hind Ast Bahashti Bih Zameen”.
India is a country like Paradise on the earth.
“Falak az u jumla amad hindustan bar tar guft har chah az ameen kishwer amad.”
(The heavens said that all the countries which have come of the earth. Among them all only Hindustan (India) has come up to the height of excellence.)
He himself refers indirectly and said:
“Singing like a parrot, in the ancient bower (dwelling),
Is the lot of Khusro blessed with Almighty Power.”
Hazrat Abul Hassan said that Amir Khusro heart was equally capable of responding with all the swirl and glow of passion, to the love of the Infinite. It is the cosmic emotion that vibrated through all his mystical ghazals, and they seem to have emerged out of the souls encounter with the Absolute. 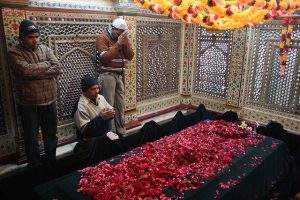