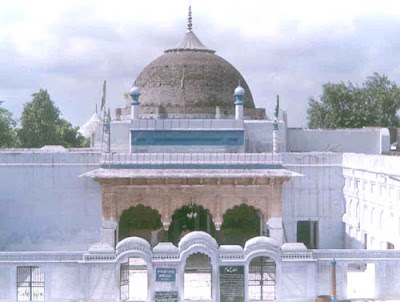 His name was Sheikh Sharfuddin and Boo Ali Shah the title. His father, Sheikh Fakharuddin was a great scholar and saint of his time. The mother, Bibi Hafiza Jamal, was the daughter of Maulana Syed Nematullah Hamdani. His father came from Iraq in the year 600 Hijri and settled down in Panipat. His lineage with several links reaches to Hazrat Imam Abu Hanifa. He was born in Panipat in 606 Hijri.

Studies: He completed his studies at an early age and taught near the Qutub Minar in Delhi for 20 years. He was counted among renowned scholars, and the top ranking teachers regarded him with great respect.

Absorbed in Wonder: Once during the studies he was lost in absorption and wonder. He got up and threw all the books into the river and trudged into the forest and busied in prayers and meditation there.

Prayer and Meditation: He undertook severe penance and meditation, stood in a state of absorption for several days in water till the fish ate away flesh form his calves. One day he was engaged in meditation, a voice he heard. It said, “Sharfuddin, we granted you your prayer, say, what do you want?” He said, “I need none save you. I will give away my life in love while standing at this place.” The voice again descended, “Get out of the water, you have to do much more.” He replied,

“I will not emerge myself from the river of love. If you want it, then do it.” Saying this he was lost again. He witnessed, in the state, that a saint appeared and lifted him out of the river and placed him on the bank.

Several chroniclers opine that the saint was Hazrat Ali, R.A., himself. He taught him some divine secrets and disappeared. From that day he was regularly lost in spiritual wonderment. His heart was filled with heavenly light. From that day he is called ‘Boo Ali Shah’.

Still some chroniclers say that he did not pledge obedience to a holy man but was admitted directly into the fold by Hazrat Ali, R.A.. Some link him to Mahboob-e Elahi, whereas others bind him to Hazrat Qutubuddin Bakhtiyar Ka’aki, R.A/. and Sheikh Shahabuuddin Suharwardy.

His stay in Panipat: He lived in Panipat till his death, and served the people from there. Hundreds drew spiritual or divine benefits from him. Besides, he undertook regular teaching and propagation of Islam. Hundreds embraced Islam because of him. The Rajputs, who lived around, were the great beneficiaries. He left a deep impact on the royal dynasty of Dehli Sultanet, and preached them of good conduct.

Revelation and Mysteries: One day a disciple of Shamsuddin Turk went to the city on an errand and saw Boo Ali Shah riding a lion and re-told the episode to his teacher. Shamsuddin Turk said to his disciple, “Go to the residence of Boo Ali Shah, and if you see him riding the lion, tell him: “The lion should live in the jungle.” The disciple obeyed, found Hazrat Boo Ali Shah in the condition and conveyed his teacher’s message. He rose from his place immediately and went to Ghote.

Death: It is mentioned in ‘Sair-Ul-Akhtab’ that he died on 17, Ramzanul Mubarak 724 Hijri, at Budha Khera, but lay to rest in Panipat instead.

He wrote the famous couplet in Farsi about Hazrat Ali:

I am Haideri (a follower of Haider, aka Ali ibn Abi Talib), I am a Qalandar and I am intoxicated (with inspiration).

I am leader of all saints