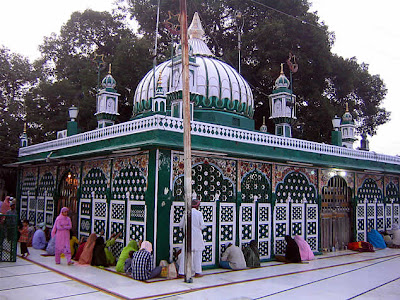 The name “Ali Ahmed” was selected in accordance with the prediction of the Holy Prophet Hazrat Muhammad, Hazrat Ali Haider-e-Kar’rar and Hazrat Khizar. His father died after few years of his birth. Then Hazrat Sabir’s mother carried him to her brother, Baba Fareed, in Pak Pattan Sharif. There he pledged discipleship on the hands of Baba Fareed.

The story of his marriage is very interesting. After a long time his mother came from Harat and requested her brother to marry his daughter to her son. Baba Farid(رحمتہ اللہ علیہ) replied, “He has nothing to do with marriage. He is lost in meditation and awe- some ness.” The sister said. “This is an excuse since he is an orphan, you decline the request.” Baba Farid(رحمتہ اللہ علیہ), upon this, married away his daughter, Khadija(رحمتہ اللہ علیہ), to him. During the night when the bride entered the room, she found him lost in prayers. When finished, he asked who she was. She replied, “your wife!”
Hazrat Makhdoom (رحمتہ اللہ علیہ) said. “How can he accommodate two in my heart? I have already it to one.” As he uttered the words a fire burned the bride to ashes.

He spent many years of his life with Baba Fareed‎ (رحمتہ اللہ علیہ) and got religious and spiritual aspiration from Baba Fareed‎ (رحمتہ اللہ علیہ). Then Baba Fareed Masood Ganje Shakar‎ (رحمتہ اللہ علیہ) appointed him Khalifa(Successor) and sent him to Kaliyar (An Indian city situated in the province of Uttarakhand). At that time the King was Ala-ud-Din Khilji. His person was the source of many Miracles. His tomb is also known as “Piran-e-Kaliyar Sharif” stands at Kaliyar besides the Ganges River and seven kilometers from “Roorkee”. His shrine is the central spiritual point and source of blessings for Saints, Successors, Followers and people of all over the world. This order is known as “Chisti Sabri Order” by his reference and relation.

Most of the time Sufi-Saints who teaches there disciple the lesson and the meaning of Fana and Ba’qa the story or the example comes from the clear incident of Hazrat Sabir Piya‎ (رحمتہ اللہ علیہ). The story or the example of Fana (Extinction, Annihilation) and Ba’qa (Eternal life in union with Allah) is explained with example of Hazrat Sabir Pak‎ (رحمتہ اللہ علیہ) because of his death incident. Before he died he commanded his disciples that when he (Sabir Piya) dies no one should touch his body. No one will give burial bath and no one will bury him, but they (disciples) should wait until a man will come riding on horse in white color clothes and he shall give bath to his body, before that no one should touch the body least they shall die. On his funeral day, it happened in the same way he commanded the disciples remains questioned who is that person who will give him a burial bath etc. thinking they did not do anything. After an hour the people there his congregations who have been appointed for his funeral they heard a sound of horse coming and within few minutes they saw there was a person in white clothing and he was on horse. The horse man came down and took the dead body of Hazrat Sabir Piya‎ (رحمتہ اللہ علیہ) and went inside a cottage and took some water and gave him the burial bath, everyone was shocked and puzzled who is he and what is going on inside the cottage. After a while he alone brings the dead body out and started making rows for offering his burial prayer and after reciting the prayer he then buried his dead body and was ready to leave. At that moment of Sabir’s disciple stopped him and asked, “Who are you oh lucky person, who gave bath to our master, please show us your face”, but that horse man doesn’t agree on showing his face, remaining adamant about it they asked again. So the horse man removes his curtain over the face and the congregation saw, it was none other but Sabir Piya‎ (رحمتہ اللہ علیہ) himself. They asked “Hazrat what is this”, then Hazrat Sabir Piya‎ (رحمتہ اللہ علیہ) replied and taught them the meaning of the question Fana and Ba’qa, that what you just saw the body that’s (Fana) it has to be layer with soil again and it shall perish, but this what you see now is (Ba’qa) never perishing the spirit, spirit that Allah gave me which came from heaven and saying this he disappeared. So this was the answer to the question that one of his disciples asked him one day what is the meaning of Fana and Ba’qa so he fulfilled it and showed them the meaning on his funeral.

1. Shairah is wonderful, draws one from presence to intimacy.
2. The beggar, who visits the rich, is hypocrite.
3. If desire greatness, be simple and truthful.
4. The guide should have the ability to correct the weakness of the seeker of truth.
5. Renunciation means to renounce the undesirable activities.
6. Illiterate and greedy mystic is Satan’s clown

Every Urs is celebrated with a lot of fanfare on three main dates of 13th, 14th, and 15th in the Holy month of Rabi-ul-awwal in Kaliyar Sharif. After a glimpse of the moon of Rabi-ul-awwal, the head priest goes to his old house (in Kaliyar village). Inside the room, he reads the Khatam Sharif and walks out with a plate on his head. The plate has Mehandi and Dori in it. Next he goes to the Dargah and reads the Fatiha. After this the Dori is distributed to everyone. Qawwali-e-Makhdum Ali Ahmed Sabir Kaliyari‎ (رحمتہ اللہ علیہ) (Salaam on Hazrat Sabir Piya) take place at the Dargah and the mood is festive.